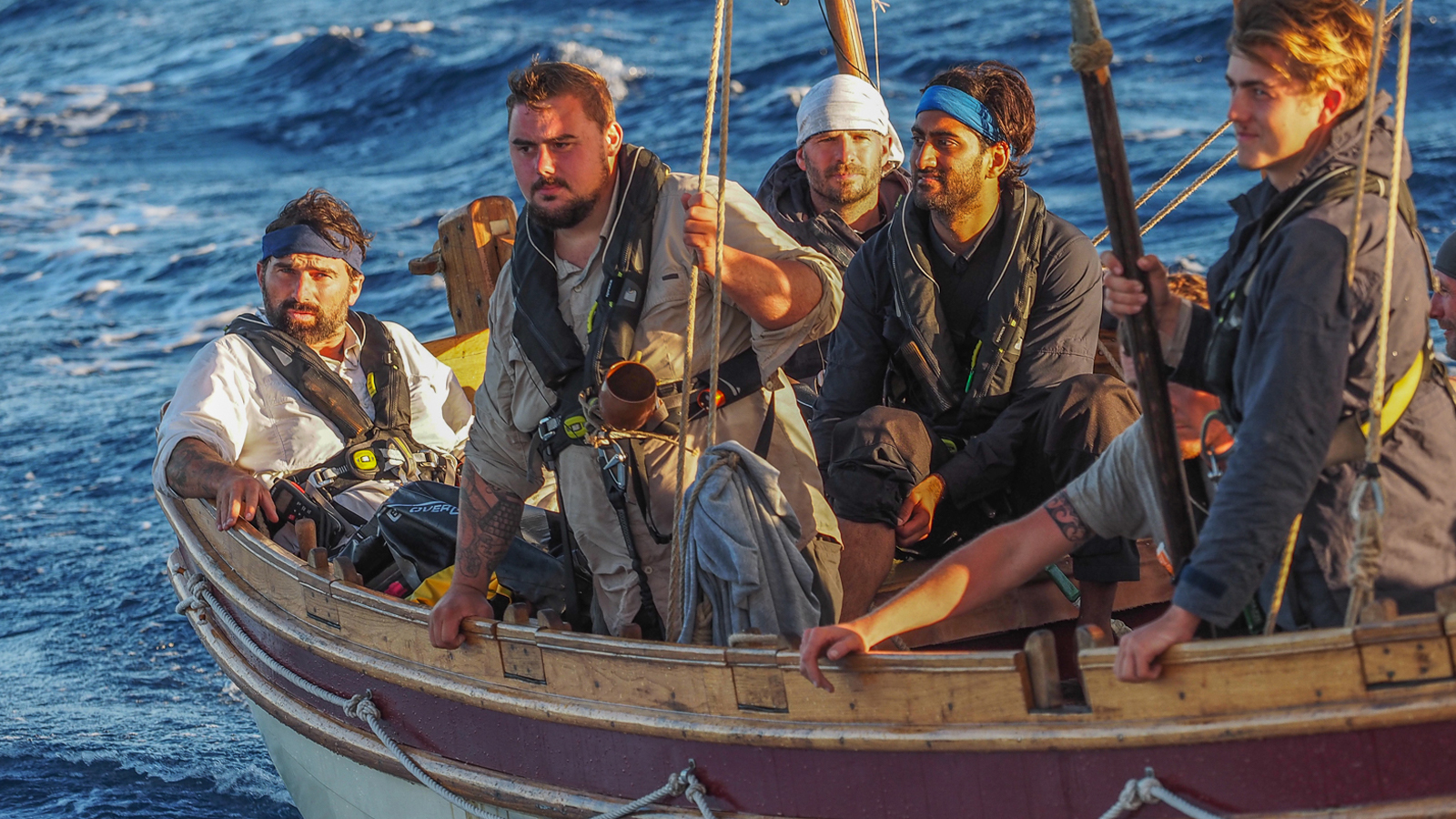 How long each day did you have to wear your lifejackets?

When I co-wrote the safety protocols for the voyage, I decided that we would wear our lifejackets 24/7 and also be harnessed to the boat. My biggest fear was losing somebody over the side and not being able to recover them. Bounty’s End is a lug sailed open launch and does not sail upwind very well. Our chances of recovering a person were very low on this voyage and therefore I wanted the crew secured to the boat at all times. There were times when we were becalmed in the tropics that we removed our lifejackets, but we had a belt system that would still keep us secured to the boat, otherwise we wore them continuously.

Given the extreme discomfort from salt sores, dehydration and heat, was wearing the lifejackets an issue?

We sourced the best fitting and most comfortable lifejackets on the market as we would be wearing them continuously for 60 days. We also carried Exposure MOB torches and Personal AIS beacons – all of which needed to be attached to our lifejackets. The Spinlock solution worked really well. Salt sores and dehydration were an issue during the voyage and some of the crew got some very nasty infections, but none of this was caused from wearing our lifejackets.

What was your highlight?

There were so many, but I think successfully navigating across the Coral Sea and through the Great Barrier Reef was a personal highlight. Like Bligh, we sailed along the reef looking for a small channel to pass through in conditions that were really tough. Strong winds and waves pushing us onto the reef could have smashed the boat into tiny pieces. I was very relieved when we passed through the labyrinth of reefs and saw Australia.

What was the toughest part of the challenge?

Everywhere you looked on this journey there were challenges, from the production team logistics and safety through to people, leadership and team dynamics. It was a huge undertaking and a multi-million-pound-budget programme to make. Our part on board the Bounty’s End boat seemed like the simple bit. The biggest challenge is down to people, and when you are cast adrift with barely enough rations to survive and less than a metre of space to lie down in, tempers fray. Bligh used a cutlass to keep command and I’m sure on more than one occasion.

You’re used to being in charge, how did you adapt to having Ant as your captain?

For this programme, Ant Middleton was cast as Captain Bligh and was our leader. He showed tremendous courage taking on this voyage with only limited sailing experience. He was an incredible leader, who knew how to look after his men. My job was to support him and show true followship. This was the first time I’ve been in that role – normally I lead, but I loved working with Ant and supporting him as our Captain. We only had one disagreement during the voyage, but you’ll have to wait until episode five to see what happens (no spoilers!!)

You made your name as a single-handed sailor, after your experience on Mutiny, what are your thoughts…single-handed or crewed?

It’s funny, many people think I made my name as a single-handed sailor, but they forget that I was the youngest skipper to win the BT Global Challenge and before that I raced the Whitbread (now Volvo Ocean Race) as part of a team. I’ve been very fortunate to sail with some great teams over the years and also forge a single-handed career. I drew on the BT Global Challenge a lot for this particular role. I was given a crew of non-sailors and needed to prepare them for a 4000 mile voyage. It took a lot of patience and perseverance to coach them through, but it was an experience I will never forget.

Did any of the crew impress you with their seamanship?

Given the starting point for this voyage our seamanship and skills were very basic and we all had a huge amount to learn. Good seamanship and safety was such a key part of this voyage. One mistake and I would have ended up in the Dock. I had legal responsibility for the entire crew on Bounty’s End and that was a concern. Both Freddy and Chris both had good sailing experience. Freddy stood out as a crew member who showed good seamanship and really understood the need to be safe. Chris on the other hand at times was a law unto himself which was a real challenge at times.

How did you navigate so accurately so you could find the gap in the reef? Were you given assistance by the support boat that we don’t see on screen?

The support boat had to be within three nautical miles of us as our safe haven and I wrote the protocols so that in the event of an incident, they would be able to render us assistance for medical and survival incidences. The weren’t there to help us navigate or provide any other assistance. Each day we exchanged cameras and batteries via a floating barrel drop and that was the only contact we had with them, apart from when Ben and Chris was evacuated.

Would you do it again? Would you be up for Shackleton’s trip?

A few weeks ago I had lunch with my good friend Nick Bubb who was the skipper during the Discovery Shackleton re-creation and we compared notes. I really enjoyed this trip, but I’m certain that I wouldn’t undertake that level of starvation again, having lost nearly a quarter of my body weight. I’ve always felt that Shackleton’s voyage would be the hardest to recreate and certainly more dangerous. Shackleton’s Boat journey was twelve days, our’s was sixty days, so maybe physically and mentally it was tougher. I think one voyage is enough for now…

The Mutiny speaking tour kicks off in Exeter on the 27th March, Plymouth University on the 29th March and at the Royal Geographical Society on the 3rd April. More details conradhumphreys.com/mutiny

Six Senses – A Sense of Present

Most people will be familiar with our five sensory senses (sight, smell,…