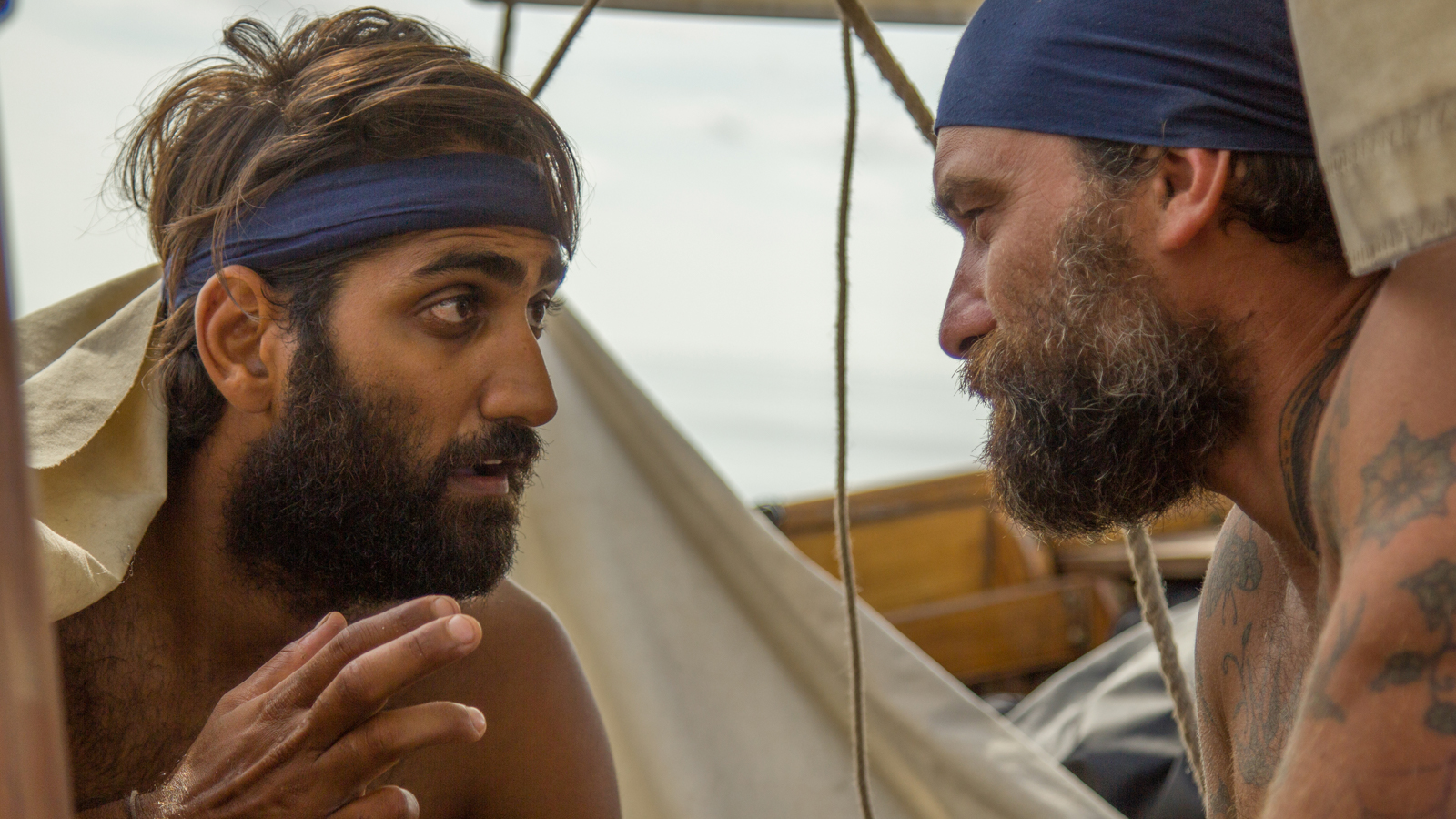 Dying of thirst in the Timor Sea

You would never have thought that too much rain would become a major issue during the recreation of Mutiny. Bligh also experienced a lot of rain during his voyage which caused great suffering to his men. In the first two weeks of our voyage it rained constantly, so much in fact during one 96 hour period it rained without stopping. Rain was the Devil onboard. It sucked morale and as Ant Middleton expressed tapping his head one day, “It just get’s into your head..tick, tick tick.” Without shelter, we would strip as quickly as possible and put on our wet clothes to try and save what dry clothes we had. Not everyone could be bothered with this life preserving routine and before long some of the crew experienced severe shivering and found it difficult to keep warm. Bligh would dance in the boat and his men soaked their clothes in the warmer sea water.  We took it in turns to do squats and exercises to try and keep warm.

We had capacity to store 140 litres (7 days at our recommended 2l/day) of water in two large 50 litre barrels and four smaller ten litre barrels. We refilled the barrels on land, where we found natural water sources. In Yandua we found a freshwater seep coming out of the ground. In Vanuatu, there had been a drought and the locals drank from a small stagnant pool. We ran a rolling boil to purify the water, but it still tasted foul and during the 1600 mile leg to Restoration Island one fifty litre barrel smelt sulphurous. We had no choice but to continue to drink from it, but everyone suffered from the effects with stomach cramps and diaorrhea. After we crossed through the Great Barrier Reef and made landfall on Restoration Island we were able refill the barrels, however the bacteria in the bad barrel was not properly removed and on the final stretch of the voyage it would come back to haunt us.

Bligh stopped a few times along Cape York peninsula, mainly on the outer lying islands. He stopped at Sunday Island, with the sole purpose of naming the island which angered his men as there was neither food or water on the island. We made landfall on Sunday Island, but found no water and again on Albany, the most northern island off Cape York. Here all we found was an old discarded boat with a hundred litres of rainwater in the bilge. We again topped up, but when we left Albany, it was clear that we would need to conserve our water. We’d be right on the limit with just a litre of water per person per day.

Progress was good along the northern tip of Australia and we hit some of our best daily runs of the whole trip passing through the Torres Strait and across the Gulf of Carpentaria. The mood onboard was good and confidence in our water situation was high. We passed through a couple of smaller rain squalls, but such was the fear of rain from the crew, no effort was made to collect it. In fact it caused quite a lot of angst, that we again would be subject to more rain. I briefed everyone that from the earlier climatology study, the weather in the Arafura and Timor Seas would get progressively lighter as the trade winds reduced the further west we are. We should expect to slow up. My briefing fell on deaf ears. Rain was still seen as the Devil!

Water in one of the fifty litre barrels started to smell very sulphurous and quickly became undrinkable. It meant that we only had around forty litres of water with still over eight hundred miles to Timor. Progress slowed dramatically as we encountered a ridge of high pressure and our daily average dropped from a hundred plus miles down to fifty. It was obvious that we were going to struggle on the water we had, so Ant took control of the ladles and we reduced our consumption down to 600ml per day. After 48 hours in the sweltering heat which was melting the camera batteries, I felt that we needed to change our tactics. The high pressure system had intensified over us and I believed from the wind direction and the cloud formations that we were right in the centre of the system with no obvious quick way out.

I wanted to do two things, the first was to lighten the boat and chuck anything that was non-essential over the side (which would be collected by the support boat, so we didn’t litter the ocean). The second was that for those of us that were fit enough (not all were) we would do a bit of rowing in the night. There were small patches, zephyrs of wind that we needed to get to and with just one person on the oars, enough momentum would be created to generate some apparent wind to keep us moving. Ant did not agree with my plan, he felt we were all too weak to row and preferred to sit tight, conserve energy and wait for the wind to fill. I understood the need to conserve energy, but I felt strongly that doing nothing was not an option and the only way out of the high pressure was to move towards Timor, however slowly. The crew vote was to wait for the wind and give it a further 48 hours. I was pretty angry and for the first time in the voyage I disagreed with Ant. We would run out of water before the wind returned.

After waiting a further 48 hours, we went to my plan and started to lighten the boat, everything nonessential went overboard. We were down to the last drops of water and it was clear that we would need an intervention or risk dehydration and possible long term health problems. Everyone was is a terrible state. The lack of water was a serious issue and our capacity to think rationally was going downhill fast. Our support boat knew we were in trouble and radioed us to say that we needed to drink urgently and that they would re-supply us with 20 litres of water during the next barrel drop. Ant, Dan and Sam continued to try and limit their water intake. Ultimately, we needed an intervention. I’ve no doubt that had we not had that intervention, we would have experienced severe dehydration and ultimately death in the Timor Sea before arriving.

Having drunk enough water to rehydrate, we set out to row and soon found ourselves in a strong westward flowing current that was taking us towards the Timor coast. I noted the  strength of the current as we passed an oceanic buoy and estimated it to be at least two knots. Land was spotted to the north west and our hopes and dreams of completing the voyage soon filled the boat. The burst of adrenaline and energy that Ant predicted when we saw land spurred us on and soon we spotted wind and the signs of civilisation in the form of fishing boats on the horizon. In the final hours before making landfall, we were treated to one of the most spectacular sunsets of the entire voyage. We were now in Timor, and on the beach was a small little shack selling chocolate and coca cola. Seven tired and hungry soul mates stepped ashore and wept with joy.